Uncategorized
This post may include affiliate links and I may earn commission if you make a purchase through these links.

How can a theory published in 1936 still help you to understand your children and how to encourage them through their cognitive development?

While Jean Piaget’s Theory of Play is closing in on its hundred-year anniversary it is still used in education and psychology to understand the stages of children’s development.

And I can help you to understand your child’s development so that you can support their play in a way that helps them grow.

When do you think of play you probably think of a boy pushing cars or a girl digging in the sand, but what is play really?

Play is any activity this is not required that you do just for your own self-enjoyment. The reward with play is the play itself.  So anything you do for fun.

Why Is Play Important?

“Play is the work of childhood.”

That’s the famous quote but who said it? That’s right Jean Piaget.

She sure did. She said, “ Play is the work of the child.”

In fact, I could give you so many more examples of famous child psychologists and education experts saying the child’s work is play.

Because play is that important. Unfortunately in today’s society and lifestyles, there is not enough time given for children to play.

Play is important to promote healthy child development.  It is so important that the United Nations has recognized that play is the basic human right of every child.

Play helps children develop in the cognitive, social, physical, and emotional areas of their brains.

Play allows children to use their creativity and imagination to strengthen their physical body and their brain.

During play, children get to take on roles of adults like playing family or playing restaurant.  They also get to conquer their fears and deal with any difficulties but they are facing in their life.

It also helps them to build problem-solving skills and develop resiliency that will help them well into their adult life.

How Much Should Children Play?

In today’s world, it often feels like there’s no time for downtime for anyone including children.

Between parents working, after-school activities, and homework finding time for children to have some downtime can feel like an impossible juggling act.

Piaget’s Stages of Play: How Piaget Developed the Theory

At the beginning of his career, Jean Piaget was developing questions for a French version of the English intelligence test. He became fascinated with why children gave the wrong answers to the questions and what was their logic behind it.

He started thinking that these answers showcased the difference between adult thinking and child thinking.  During his time children are more viewed as small adults so the idea the children and adults thought differently was revolutionary.

Once he had his own children he started making observations of how they grew and how they play.

Piaget developed his theory using the observations he made of his own children and came up with a theory of cognitive development that focused on the stages of play that children go through.

The Stages of Cognitive Development found in Jean Piaget’s research

1. The sensorimotor stage (birth to 2 years)

The sensorimotor stage of Jean Piaget’s theory spans from birth to 2 years.  during this stage, children learn through their five senses and through movement and exploring with their environment.

A good way to encourage development during this time is by giving children sensory play with sensory bins with different textures and playing with different activities that make different sounds.

It is important to provide children with a rich environment full of objects they can interact with that incorporate all of their senses.

Things you can give your child:

The preoperational stage of Jean Piaget’s theory spans from 2 to 7 years.

This stage begins when your child starts talking and communicating more, but they are still not able to put ideas together in a logical way.  During this time children start doing parallel play that means that they’re playing next to children but not really with them.

In this stage, it is important that your child continue to learn through real-world experiences but is also given the opportunity for pretend play.

Things that will help your child through the preoperational stage :

The concrete operational stage lasts between the ages of 7 years old and 11 years old according to Jean Piaget’s theory.

At this age, children become expert problem solvers and want to understand how the world works around them.

Things you can give your child to help them develop during the  concrete operational stage:

4. The formal operational stage (11 to adult)

The formal operational stage Jean Piaget’s theory from around 11 or 12 years old through adulthood.

During the formal operational stage,  children and adolescents begin to understand abstract thought and can manipulate ideas in their heads.

Things to help your child develop during the formal operational stage:

H2: What are the key elements of Piaget’s theory?

Piaget’s theory consists of the four stages of cognitive development that always happen in the same order, are never skipped and slowly transition into the next stage.

What is schema according to Piaget?

Frederic Bartlett was the first to use the idea of schemas in his theory on learning, but it was Piaget who would first use the term schema.

For Piaget, a schema is both the process of learning new knowledge and also the category that knowledge belongs to.  He believed that schemas were constantly evolving as people took in new knowledge.

A common example of a schema according to Piaget would be a child’s understanding of a dog.  To a small child, a dog has fur, four legs, teeth, and a tail, when she sees a cat she may also call it a dog because it checks all the same boxes.

It’s not uncommon for small children to call all animals they encounter a puppy.  As they are corrected and learn more about different animals their idea of what a puppy is changes to be a more specific definition.

According to Pipaget children play in 4 ways, functional, constructive, fantasy, and games with rules.   These types of play occur at different stages of development.

Piaget believed that the way children play shows what their level of cognitive development is.

Functional play is more physical play, like running, sliding, jumping, dumping out a box of toys, and experimenting with the world through their senses.

From here children will move from just moving blocks around and tossing them to stacking them and starting constructive play.

During this stage of play children want to play with toys and other objects to accomplish a goal.  For example, using blocks to build a tower.

Children tend to play this way between the ages of 3-7 years old.  Eventually they will start mixing in some fantasy play with their constructive play.

These games can be fantasy themed like princesses and knights or they can be role-playing games like playing teacher, police officer, or mom and dad.

The best way to support and encourage your child during this stage of play is to give them dress-up clothes and play pretend with them. Often they will want to tell you what to do during the game.

This stage can start around 3-4 years of age and last through 11 or 12 years old.

The last stage of play is games with rules.  During this type of play children play games with friends that have preset rules like tag or hide and seek.

This can also include board games and video games.

During this stage children understand how to follow rules and if someone breaks the rules there are consequences in the game. They understand ideas like cooperation and like being competitive.

These games usually begin around the age of 7 and continue through adulthood.

When you are choosing toys for your child, you want to consider the stage of development they are in and the kind of play that they do in that stage.

For example you wouldn ‘t buy a board game for an 18 month old, but playing it with your 7 year old could be fun for both of you.

You want to choose the toys that best help your child develop in the stage that they are in.

You can learn more about my recommendations on toys here in my gift guides, which are based on cognitive development and theories of play.

Interested in getting your little one to play independently?

Check out my Purposeful Playspace e-course to learn how to create a space for your children that invites them to playin ways that are more engaging, purposeful and independent.

Want more information about how play impacts your child’s development?

Check out my e-book: Simply Play: Everything You Need To Know About The Most Important Part of Childhood

Love this post? Check out some of the articles below.

What are the stages of play? Jean Piaget’s Theory of Play!

This post may include affiliate links and I may earn commission if you make a purchase through these links. How can a theory published in 1936 still help you to understand your children and how to encourage them through their cognitive development?  While Jean Piaget’s Theory of Play is closing in on its hundred-year anniversary…

What are the ages and stages of child development? (Bonus chart!)

Get the ages and stages development chart here!! This post may include affiliate links and I may earn commission if you make a purchase through these links. During the first 3 years of life babies and toddlers are making 1-2 million neural connections a minute.  Mind blown! During those years they go through massive growth…

Are Pikler triangles worth it? abso-freakin-lutely

Are Pikler triangles worth it? abso-freakin-lutely This post may include affiliate links and I may earn commission if you make a purchase through these links. So what is this magic triangle that seems to be in every playroom on Instagram?  It’s a Pikler triangle and there are some great reasons why so many moms are…

Episode 5: The Psychological Importance of Play + How to Recover from Helicopter Parenting

This post may include affiliate links and I may earn commission if you make a purchase through these links. On this episode of Play. Learn. Thrive., clinical psychologist Sarah Mundy shares with Alanna insights about the importance of play in the development of confident, self-motivated, independent kids. In addition to being a core element of… 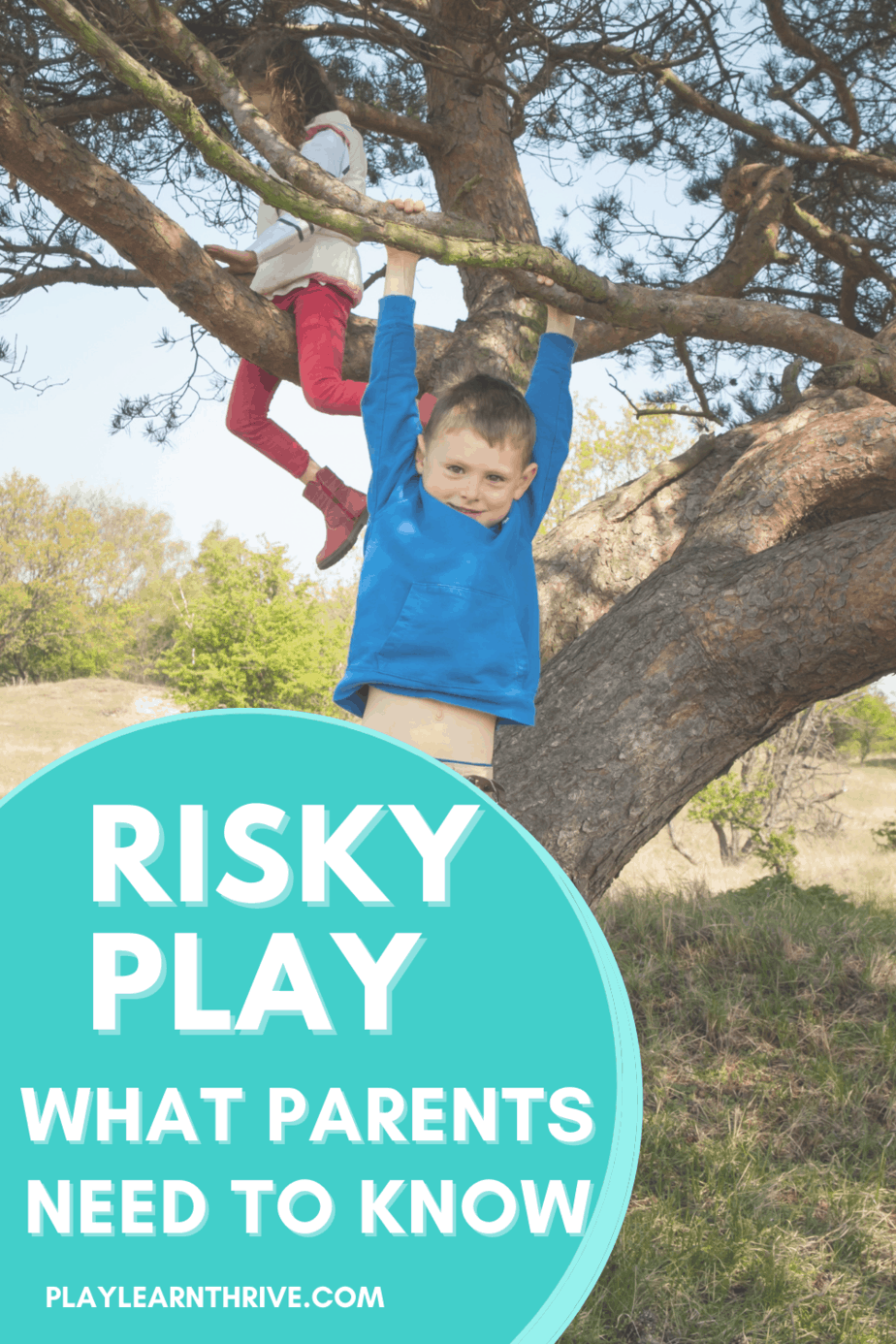 Risky Play This post may include affiliate links and I may earn commission if you make a purchase through these links. Children have an innate need for risk-taking. In addition, children who are encouraged to take risks at a younger age are able to better manage risk once they have gained more independence. A lack…

🔹The Ultimate Beginners Guide to Play🔹⠀⠀